This musical was written by Edwin de Vries, Music was made by Tom Harriman, Pamela Philips Oland and it was directed by Theu Boermans. And the main actors were Valentijn Bernard, Debbie Korper and Linde van den Heuvel. It was performed for the first time on the 30th of october 2010. I have seen the performance at airport Valkenburg, that is located in between Wassenaar, Katwijk and Leiden. My first impression of the performance was that the decor was very detailed and the audience seats turning was a unique and great addition.

The musical starts with an intro video on the screens (“curtains”). Then someone walks in front of the screen. The audience (all seats) turn at the same speed the actor walks. Then the two screens open, revealing a building in which a Student Union initiating new members. The actor walks into the decor. No music is played in the beginning except for during the intro video. 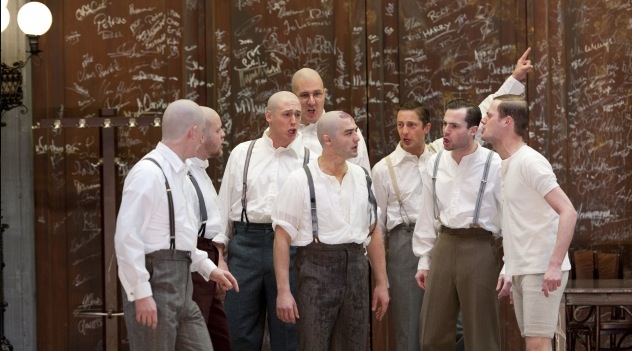 The decor is huge, it is 360 degrees since the audiences view can be changed over 360 degrees. There is a lot of detail in the decor, in one piece there even is a small beach and even a small sea with waves in it in which a boat is pushed. There is a lot of detail in the costumes as well. As you can see in the picture above. For example German soldier has a helmet and a symbol of the SS on his uniform. Everything is as realistic as possible. Most parts of the musical are described pretty clearly but sometimes (like an almost random dance in between) it is left up to interpretation. Objects like guns have detail as well. The gun shots are that loud they seem real and for example real motor bikes are driven around the decor.

The lighting in the musical plays quite a large role. When an actor walks in front of the decor (circle) and the audience turns at the same time, a spotlight follows the actor all the way. At times the lighting is turned off when the screens are open to recreate night time.

The decor has multiple stories at times, this makes it even more realistic, on of these you can see in the picture below. At the end of the musical the hangar door open and a real old airplane that is outside of the building which was overwhelming.

The style of the musical is to make it realistic, with some humour in it, to make it look as natural as possible (except for the comedic parts). The actress that plays the queen is a bit melodramatic, overexaggerating most of the time, which is part of her character.

When the screens are open, the actors do not talk to the audience, except for when they are singing a song. When an actor is walking alone in front of the screen, they do talk straight to the audience. This gives you the feeling you know their thoughts more.

The director probably adjusted some of the text, since it had to be a little different form the movie, or it may not have sounded realistic.

I would call the movie a tragedy, since most of the movie revolves around the conflicts in times of war.

The meaning of the performance is meant as entertainment and to make you laugh, but also to make you think about how you would act in war. Would you resist? Would you join the enemy? Would you betray other to keep yourself/ you family safe? It was also quite emotional at times.